Russia’s economy was already in decline before the WW1 began, and its involvement in the conflict only exacerbated the situation. By 1917, russia was on the verge of collapse, with widespread poverty and a deep political divides. In March  Tsar Nicholas II was forced to abdicate, and a provisional government was formed in his place. In 1918 bolsheviks signed a peace treating withdrawing from WW1 and giving up russian-occupied territories in Poland, Belarus, Ukraine, Finland, Estonia, Latvia, and Lithuania.

Meanwhile in Ukraine, the people declared their independence. Our new nation was then quickly attacked by russian communists, who sought to overthrow the new government and return Ukraine to Russian control.

Ukrainian leaders sought international help - recognition and support, and one of the ways to promote awareness of Ukraine was an international concert tour by Ukrainian National Chorus. One of the songs they performed was a folk chant called Schedryk arranged into a song by composer Mykola Leontovich. After a sold-out performance at a Carnegie Hall, Peter Wilhousky - an American of Ukrainian descent wrote English lyrics for the melody, resulting in Carol of the Bells - one the most popular and beloved Christmas songs.

That was about 100 years ago. Ukraine did not receive the support it needed and was again occupied by Russians who killed, pillaged, looted, tortured, and raped. Children kidnapped from parents and raised in  orphanages without connection to family or culture. Russian starved millions of Ukrainians to death, sent millions to die in siberian concentration camps. Russians fought against our culture and language; systematically murdering writers, artists, composers, including Mykola Leontovich.

But now is not 100 years ago. Thank to the actions of readers like you, Ukraine will not fall, and will liberate all of her territories. Thank you for protesting russian aggression on the streets, thank you for opening your home to Ukrainian refugees, thank you for the phonecalls you made to your political representatives. Russia will lose; russia already lost because there are no good scenarios left for russia politically or economically anymore, regardless of military outcome.

My family is still in Ukraine. No one is leaving, everyone is working to support our defense. I have donated over 100% of my salary (not 1 month of salary, but every month) this year to various Ukrainian causes. Please take action - as I wrote before the best way to help is to call - actually pick up the phone and talk or leave a voice message to your political representatives to support Ukraine. Happy holidays, happy 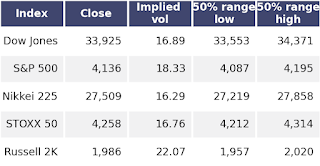 If you're interested in consulting services on volatility trading, email me at onlyvixx@gmail.com